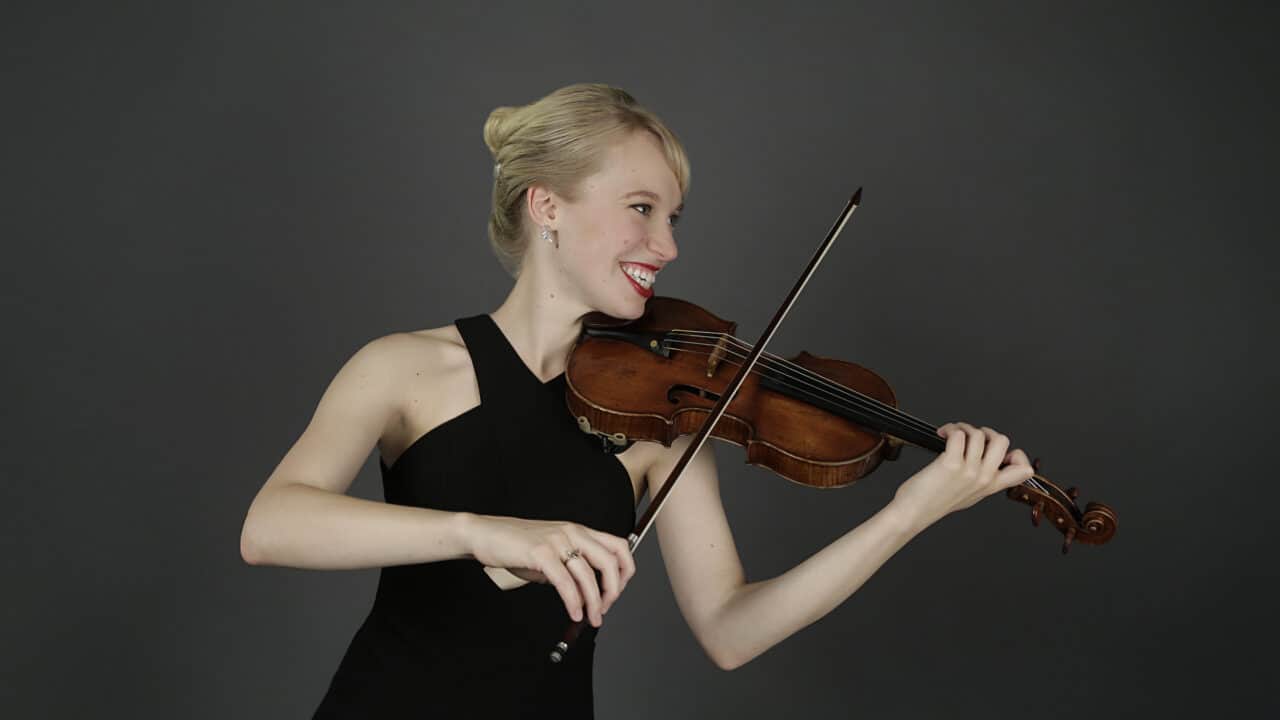 Franz Schubert:  Symphony No. 8 in B Minor, “Unfinished”

Peter Tchaikovsky: Concerto for Violin and Orchestra in D Major 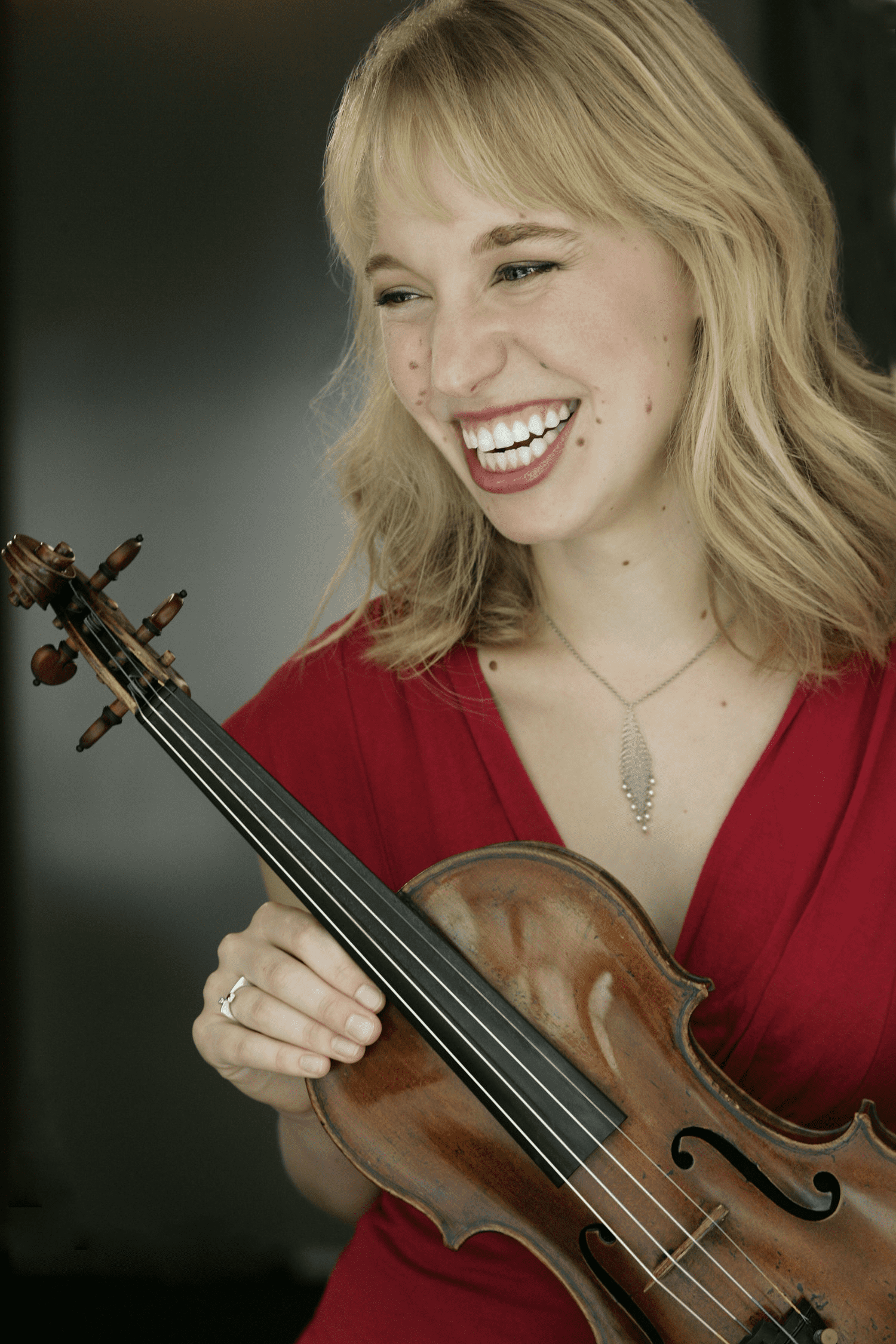 Daring, versatile, and charismatic, American violinist Robyn Bollinger is recognized for her musical creativity, rich tones, emotional depth, and technical mastery. Having made her Philadelphia Orchestra debut at age twelve, Ms. Bollinger has since performed with orchestras throughout the United States, in chamber music on national and international stages, in recital and at numerous festivals.

Following 2019 summer engagements at the music festivals of Halcyon, and Monadnock, and at the Highlands-Cashiers and Orcas Island chamber music festivals, Ms. Bollinger’s 2019-20 season is anchored by a prestigious Dumbarton Oaks Early-Career Musician Residency in Washington, DC. Orchestral performances this season include the symphony orchestras of Helena, Southern Pennsylvania, and Symphony In C. Ms. Bollinger can be heard on tour in the fall and spring with Musicians From Marlboro (with concerts at Boston’s Longy School of Music and Isabella Stewart Gardner Museum, New York City’s Weill Hall at Carnegie Hall, Philadelphia’s Perelman Theater, and Washington, DC’s Freer Gallery), and  with the New York-based ensemble The Knights.  Festival appearances include St. Bart’s Music Festival and TaoArts Chamber Music Festival, and she can be heard in recital for the Santa Monica Music Society. Based in Boston, Ms. Bollinger can be heard throughout the season around the city in concerts at Jordan Hall with A Far Cry (in a program curated by her), at Sanders Theatre in Cambridge with the Boston Chamber Music Society, and at First Church on the Glissando Concert Series.

A recipient of a prestigious 2016 Fellowship from the Leonore Annenberg Arts Fellowship Fund for her multimedia performance project entitled “CIACCONA: The Bass of Time, Robyn Bollinger began touring the program in 2018. The multi-media concert that tells the story of one of the oldest musical ideas,  the repeating bass line, through solo violin music.  To date the concert has appeared at the  Lake Champlain Chamber Music Festival, Emory University, National Sawdust (Brooklyn, NY) and the Isabella Stewart Gardner Museum. The Boston Globe praised “...she did more than just perform dauntingly difficult works by Biber, Bach, Bartok, and Berio. She melded them into an evening-length exploration of the ciaccona as such — a Baroque dance form that has morphed over the course of centuries.... Throughout the night, Bollinger’s technique proved equal to every challenge, with playing that was poised, precise, and musical” and The Boston Musical Intelligencer called her “an engaging and original talent.”

A sought-after collaborator, Ms. Bollinger is a popular figure on the chamber music stage, both as a member of the renowned, Grammy-nominated Boston-based ensemble A Far Cry, and for her work at Festivals, and on chamber music series. She has performed in Midori’s Music Sharing International Community Engagement Program “ICEP” in Japan, performed in recital in Japan’s Phoenix Hall, (Osaka), Oji Hall, (Tokyo), and Tokyo National Arts Center, and served as a Young Artist Fellow for Music for Food, the national musician-led initiative for local hunger relief. A former member of the Newman String Quartet, which took the silver medal at the 2007 Fischoff National Chamber Music Competition, she has also served as a member of the Lake Champlain Chamber Music Festival's Young Trio in Residence (2015 - 2017). Collaborations include the Chameleon Arts Ensemble, Jupiter Chamber Players at Lincoln Center, Chameleon Arts Ensemble, Mistral Music, and with members of the Borromeo, Cleveland, Juilliard, Johannes, Lydian, Mendelssohn, and Pro Arte quartets, among others.

Robyn Bollinger records for Crier Records. During the 2017-18 season, she released her debut solo CD and DVD, both titled “CIACCONA: The Bass of Time.” James Oestreich of The New York Times reviewed the CD, and selected her performance of Biber’s Sequenza VIII as one of “8 Best Classical Music Moments of the Week on YouTube,” writing: “It was the concept that drew me to the new CD, CIACONNA: The Bass of Time, from Crier Records, but it was the young violinist Robyn Bollinger who held me captive. Through solo works of Biber, Bach, Bartok and Berio, Ms. Bollinger explores the lineage of the chaconne or passacaglia, call it what you will, with its often obsessive focus on a bass figure.”  As a member of A Far Cry, she recorded the Grammy nominated “Dreams and Prayers” and “Visions and Variations.” The all- premieres CD includes arrangements of works by Hildegard von Bingen and Ludwig van Beethoven and Osvaldo Golijov, as well as works by Mehmet Ali Sanlıkol written for and premiered by A Far Cry.

In addition to the Leonore Annenberg Fellowship, Ms. Bollinger’s talent has been recognized with numerous awards, among them an Entrepreneurial Musicianship Grant from New England Conservatory for her ground-breaking "Project Paganini" performance project featuring all twenty-four Paganini Caprices. Ms. Bollinger has received top prizes at many international competitions, among them the International Fritz Kreisler Competition in Vienna, the Yehudi Menuhin International Competition for Young Violinists in France, and the Louis Spohr International Competition in Germany. She has been specially recognized with prizes for her performances of Bach and Beethoven works at several competitions. A familiar figure on radio, Ms. Bollinger came to national attention through her 2014 residency on PRI’s “Performance Today” and several appearances on NPR's "From the Top."

Born in Philadelphia in 1991, Robyn Bollinger is a former recipient of the Laurence Lesser Presidential Scholarship at the New England Conservatory of Music, Boston, MA, where she received both her Bachelor’s and Master's degrees with honors. Ms. Bollinger’s former teachers include Miriam Fried, Soovin Kim, and Paul Kantor. From July 2013 to May 2017, Ms. Bollinger played a 1778 Joseph and Antonio Gagliano violin on generous loan from the Ravinia Festival's Steans Institute Instrument Bank. As of May 2017, she now performs on a beautiful 2017 violin made by the world-renowned luthier Samuel Zygmuntowicz, on loan from a private collection.

Symphony No. 8 in B Minor, “Unfinished”